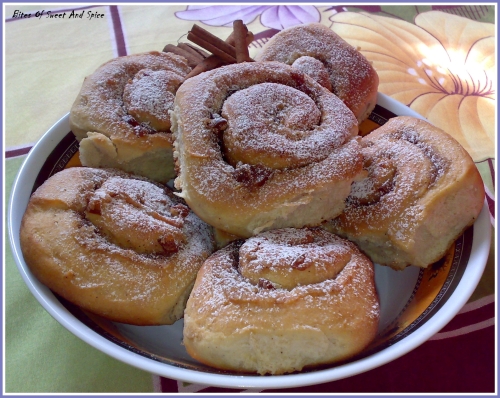 I’m sure these sinful and delicious Cinnamon Rolls need no introduction to many of you, being a common pastry in North America and Europe.  Did you know that Cinnamon Roll day is celebrated today in Sweden?!  🙂  Cinnamon Rolls are presumed to originate from Sweden where they are known as “Kanelbulle”.  I guess this is the perfect time to enjoy a freshly baked Cinnamon Roll, warm from the oven.  🙂  Happy Cinnamon Roll Day!!!

I preferred eating these just as they are and simply sprinkled some powdered sugar on top for a finishing touch.  🙂  I know Cinnamon Rolls are even more irresistible with a yummy frosting or glaze.  So if desired, allow to cool for 10 – 15 minutes before adding a powdered sugar glaze or cream cheese frosting.

If you want freshly baked Cinnamon Rolls for breakfast in the morning, don’t worry about all the time it’s gonna take!  You can do most of the work the night before.  Prepare your dough, let it rise and make the rolls.  Then place the individual rolls in your baking pan and keep it in the refrigerator.  All you have to do next morning is to bake them!  🙂

Cinnamon Rolls are perfect when you want something special for breakfast or tea time.  Making these at home might be a bit time consuming, but it’s totally worth it.  And there’s nothing better than the fragrant smell that fills your house when they are baking in the oven!!  🙂

Posted in Breads and Loaves, Breakfast, Pastries, Sweets and Candies